a college student Hello everyone, I am the new scout of TOKYO HOT. In this time, it introduces NATSUMI SAWADA to whom I did the scout for the first time.
Nature or the character is different for a moment from the girl of the retreat now though it is a beautiful woman as you see. Though there is a
religious organization of the topic now, she seems to belong to such organization. Anyway, it is a religious girl. However, such a girl is easily caught
unexpectedly. We managed to say "It was possible to become happy" and brought her to office of TOKYO HOT. The villainy staff will cherish NATSUMI
afterwards. NATSUMI who believes villainy staff to be religious parties concerned is very obedient for the staff because it is religious. She follows cheerfully
the villainy staff' disagreeable demands such as put off the clothes, open the leg and etc. In addition, doubtful men who were covered of the mask appear and
it joins the attack. Though she complain to say that she is not been known such things and wants to go back home with showing a helpless expression, however
mask men shouting that theme of this time is erotic and eroticism is insufficient for the expression and make careful licking service to NATSUMI. Then, three cocks
appear. First one is made fellatio and other two are made hand job service. NATSUMI obediently follows it as said though it dislikes. No matter how it is painful,
NATSUMI endures it though the head is suppressed and the cock is inserted up to the interior of the throat, this is a technique to be able to believe in. Her pupil is
completely congested and the expression that erects the cock is so amorous. It is pleasure to insult by ***** the woman who shows the disliked expression. In the
continuing scene, cock is inserted in to the mouth of NATSUMI who made to sit and face up. The spectacle of which a large amount of saliva drips while blowing
the bubble every time the cock is put in and out by the mouth is perfection of lasciviousness. Then, it is fucking time, the cock is inserted mercilessly into NATSUMI
who entreat to return to home by half cry. NATSUMI is violently pierced by standing backing and is a continuous piston at the woman on top and missionary
posture in the sofa. The sticking liquid blots from the inside of the vagina and it goes out. The first vaginal cum shot was made to NATSUMI who seriously dislikes
putting semen out in the vagina. It gets excited greatly by the scene that semen that injected into her pussy flow over when she strains herself. NATSUMI is fixed
to the chair in the state of an open leg by the continuing scene. Special SM apparatus is installed in the mouth and the mouth is not shut. In addition, the glass
stick and the thick vibs toy are inserted in the pussy mercilessly, and it is congested in the attack lasting for a long time and congested in the color the vagina.
Vagina congested to lascivious color to the attack lasting for a long time. Then, fucking party by three men starts continuously. Men play her body by the dictates
of their desire. The men's tongue attacks attack whole body of non residence NATSUMI. Then, raw fucking begins after they moved to the bed. Violent of the raw
fuck of the place by which the pussy is damaged is patent of TOKYO HOT. The limit of the pussy is very limit in the cock that attacks her pussy one after another.
However, the cock is obediently inserted as ever before in NATSUMI who believes fucking party to be an initiation of an important sexual. After NATSUMI who is
fucked as they like poke violently, the ceremony of three continuous vaginal cum shot ends. A large amount of semen gushes from a damaged vagina by rubbing.
The woman who believes the injected a large amount of semen to be "Holy" liquid from a very welcome founder of a religion is obedient to the last minute. And, the
shout of joy as "Good job FUYUMI SAWADA" goes up with applause from the villainy staff at the end. Apparently, FUYUMI SAWADA seems to have been mistaken
for NATSUMI SAWADA. However, it is a part of the villainy play of TOKYO HOT when revealing the trick. The trap was not told to me of the scout apprenticeship.
However, NATSUMI is a religious and obedient slut. She permitted such mistake of others easily. On this occasion, hope she convert to "Vaginal Cum
Shot Protestantism" in the future. n0150 Sawada Natsumi Natsumi Sawada New Original Movie Creampie Gangbang Toys speculum irrumatio(irrumation) Strap Mask man Tool for opening mouse Casual Wear Female College Student 小乳 Bカップ スレンダー セミロング 色白 女子大生系 神奈川 映画、ＤＶＤ鑑賞 女子大生 餌食情報
名前 ： 澤田なつみ
身長 ： 165cm
スリーサイズ ： B83. W57. H84
出身地 ： 神奈川県
星座 ： うお座
血液型 ： A型
チャームポイント ： N/A
好きなタイプ ： 男らしい人
好きな食べ物 ： トマト
趣味 ： 映画・DVD鑑賞
マイブーム ： ウォーキング 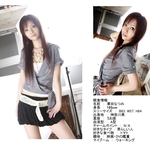 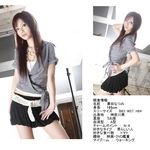